Summer 1976 Dracula and Dream team head up north doing both shows at each venue. This is what a certain Mr Ray Smithson, Headmaster of Baysgarth Comprehensive school had to say :

A classic Russian play chosen for a school trip shocked teachers and parents. A coach load of boys and girls from 13 to 16 saw explicit sex scenes and a topless actress who mingled with the audience. And now Mr Ray Smithson, Headmaster of Baysgarth Comprehensive School, Humberside, has written to Sheffield’s Crucible Theatre to complain that no warning was given. He said yesterday that the choice of play, Dostoevski’s The Dream of the Ridiculous Man, by Pip Simmons Theatre – had had his full approval group had a good reputation and there was nothing to suggest this production contains explicit sex scenes. The theatre was well aware that this was a school booking and should have warned us, but Mr Arnold Elliman general manager of the Crucible said that the theatre had taken all possible precautions to protect young children. 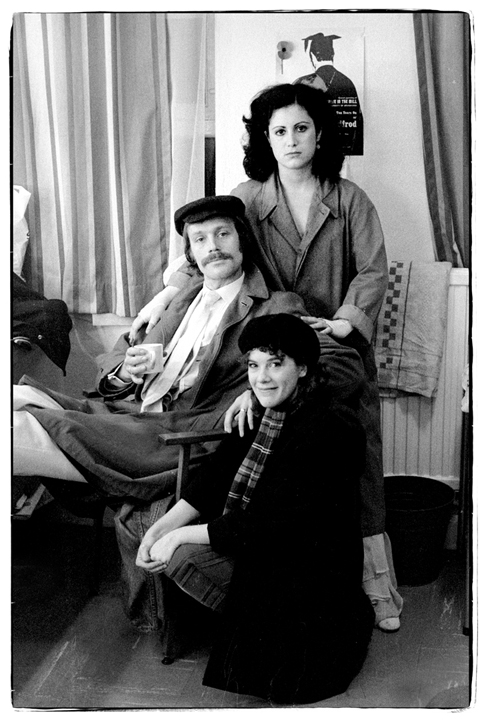 We didn’t know it at the time but the sweet nice looking skinny boy groupie called John who I met in the lift at Leicester Haymarket was to become a buddy for years to come. He and I would one day be the two parts of a pantomime horse. How did this happen? He was an Assistant Stage Manager at the Haymarket and because we didn’t need much help, he had the chance to watch the shows amd appreciate them every evening and then hang out with us after the show.Welcome John Altman who was later to become Eastenders Nick Cotton. His best-selling book ‘In the Nick of Time: John Altman’s autobiography tells all !  This is what he remembers:

I was only there for a few months when this incredible theatre company arrived called Pip Simmons Theatre Group, never heard of them but I was completely blown away. They were partly a rock band and by that time my interest in music had been cemented. Visually, I had seen nothing like it in the theatre before, they did an incredible version of Dracula. Two girls came on naked and then got dressed to strip music, there was blood everywhere, sex, white doves …. it was a pageant of truly exciting theatre, I watched agog every single night. They were self-sufficient so there wasn’t a lot to do for them, I jammed with the band on drums and drank with them after the show. Pip worked under cover; he never wanted to let anyone know who he was, it was underground fringe alternative rock theatre.

taken from John Altman’s autobiography ‘In The Nick of Time’ 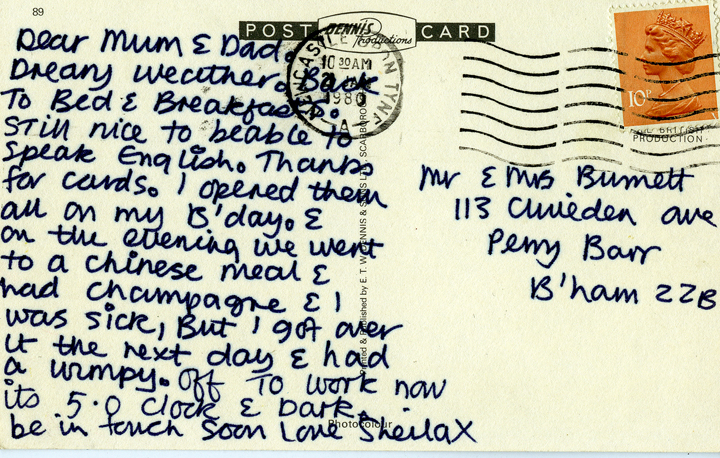 Why the nudity? Why this mischief on stage? Pip Simmons Theatre Group had no philosophy when it was formed. Never did have any philosophy, just a lack of respect for the written words of the genuflected Pinter, Wesker, Bennet, Osborne, etc. This is the year of Punk! anything goes: the underground press OZ & Ink cock a snook at established press; Sex Pistols to the established music industry with ‘Anarchy in the UK’ we see posters of a topless queen; a restless generation find ingenius ways to create disorder, hippies are out, punk is in, anything goes and if you wanted to stand on a stage doing a reverse strip, we didn’t have the Lord Chamberlain to ban it. What we the group had in common was a hooligan attitude and and a deep commitment needed for a Pip Simmons production.

There I was in the usual darkness. What they have created and perfected in their years of nomadic life is a kind of musical theatre – its distinctive marks are disciplined aggression and wildness. There has been no other group which has chosen to suggest the nasty, violent fury of the times with such physical gut and power, no other group group which has also managed a form of wistful music gentleness as in definitely Dream of a Ridiculous man. For here they are lambasted by criticism, yet for the first time in Britain, playing in a major non-fringe theatre. It gives them, I suppose, a dangerous respectability. We ended 1976 with Dracula at the Royal Court LDN and I swear, standing on that stage was not like standing on any other stage encountered on our tour. Narrow, deep rake, look up and you see the boxes, the stalls, the circle, the gods. The Theatre breaths & creaks, we are merely passing by, the ghosts of past performances linger in the woodwork and so here we arrive to do Dracula 2. We have been preparing for this, a London audience, not to be taken lightly. ….. Drac 2 not to everyone’s liking in the press, but we survive and they had a field day with the reviews.

Tolling Bells, howling dogs, creaking coffins, a spider eating lunatic and the screams of the undead are just a few of the ingredients of the Court’s Christmas attraction. In this brainstorming version of the travelling Pip Simmons Theatre Group’s spine – chilling panto, they hurl themselves with religeouse fervencey of a black mass congregation.Blood by the Gallon gushes from the wounds and mouths of the victims, and screams and smoke issue freely from the murkey stage. 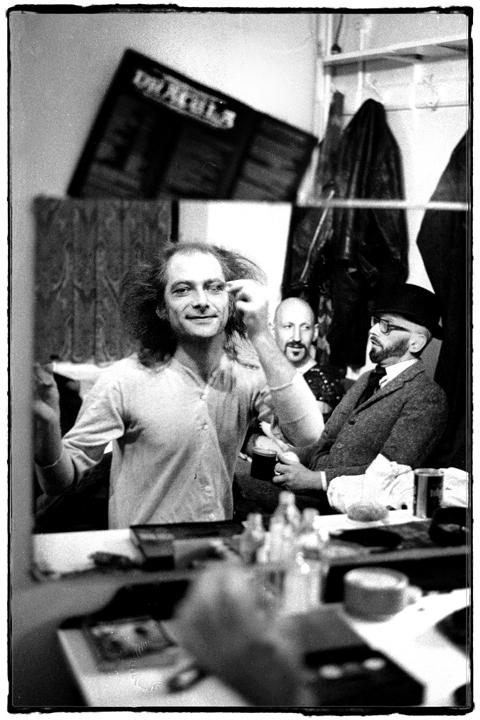 Pete’s dressing room, The Royal Court, we all have our name on the door, Pete makes sure we all know he has a star on his.

……. Dracula’s presence merely releases the various urges of an assortment of scientists, poets, heroines and heroes who loose their trousers and nighties as the mood takes them. The music by Chris Jordan (doubling the voice of God) is a knockout.There is a bit too much Mel Brooks for my liking, but this said,PS are the most visually exciting group in Britain and we should be proud of them and this madly erotic,madly inventive and madly mad showpiece.

I sneak out in the interval, with a coat thrown over my nighty to take this photo dodging the traffick in the bitter winter freezing cold. 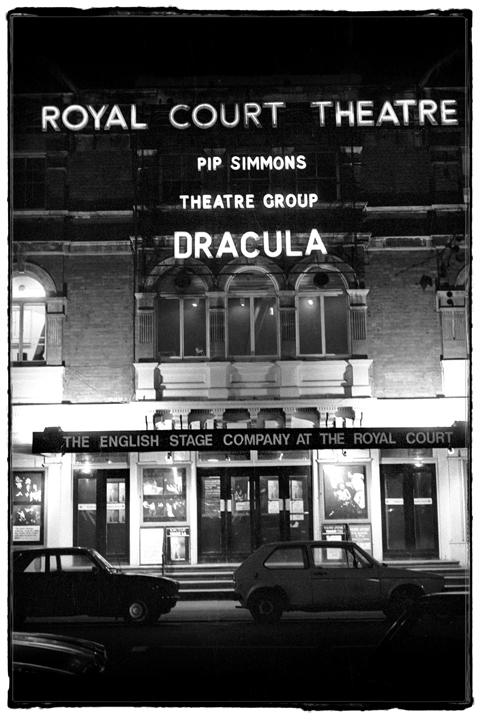