I swear the Mickery was in a different time zone. It had its own magazine and its own doctor, its own Alsation Tromp (named after a brand of Dutch gin) and production photographers  Maria Austria and later Bob Van Danzig who were able like magic to conjure up photos taken in the darkest and most challenging of theatre lighting.

The Mickery also had its own special fragrance, a mixture of canals, beer and strong shag. Strong shag the roll up tobacco of choice, it hung in the air and whatever time of day you arrived, you could still smell the smoke from the night before. Everyone smoked, maybe Emil didn’t smoke. There were two Pinball machines at the back of the dark bar; it was always dark at the Mickery.

We watched and performed more theatre here than anywhere. ‘The Mickery was not a place, but an attitude’ and so it was here An Die Musik arrived, a show that commemorated the 30th anniversary of the liberation of Holland. The house of Anne Frank was nearby … we had an audience, but then we always did at the Mickery. Flashback: My first time in Amsterdam, first time at the Mickery and first time I met Pip Simmons. The show is Dave and Goliath by Nice Pussy.

Nice Pussy was formed by two former members of PSTG Chris Jordan and Warren Hooper plus newcomer Rod Beddall. I was girl Friday of the group, I did costume, props, sound and bought chicken giblets every day for Rod. Rod a butcher’s son had no problem with raw meat, it packed a punch on stage and on this occasion represented roadkill, the other members of the band. This chemistry with meat came in very useful in the future Pip Simmons Theatre Group.

It was a matinee; not many people showed up. I was upstairs in the wide dark Mickery lighting booth doing the sound and Pip arrived unannounced, put his finger to mouth shush. So this is Pip: hair, mustachio, ciggie, big white afghan coat, red Merc parked outside!

The boys didn’t know he was in and I guess he’s come to see to see if Rod would make a good Dracula. Chris Jordan writer of all PSTG music and founder member of PSTG had suggested Rod as Dracula for the forming of the new group. That’s how it happened back in the day. This bloke Rod is big, bald, plays all instruments, can sing and eat raw chicken giblets. He got the job! and I his missus came too this the following years, meanwhile, I was just Girl Friday getting the chicken giblets. 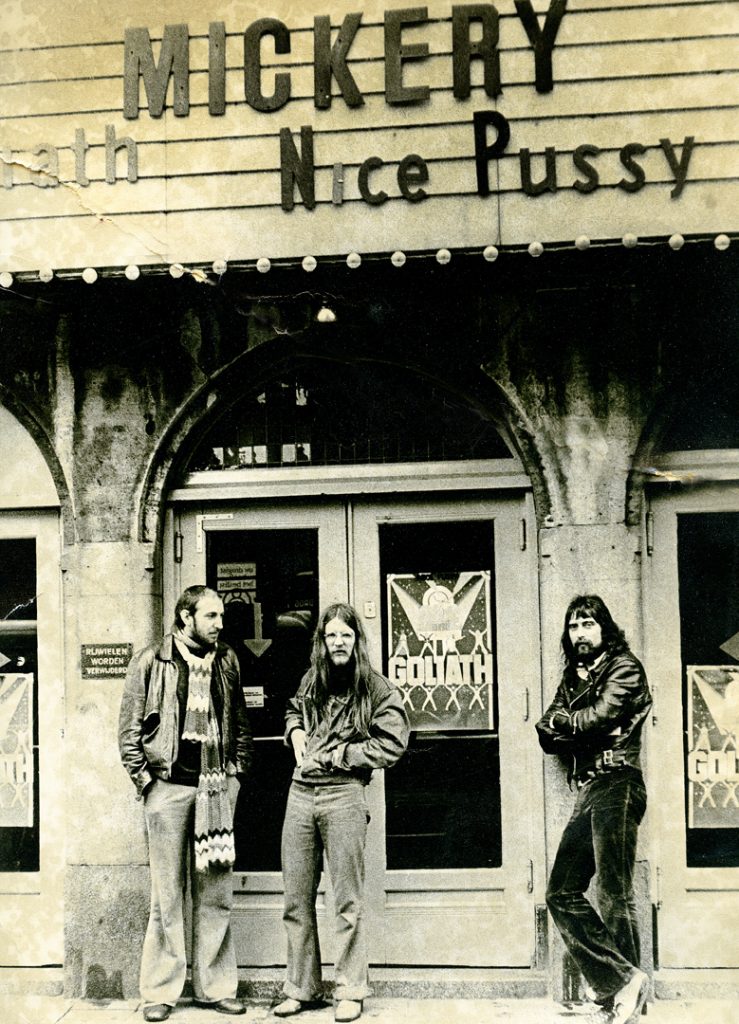 I have two husbands in this photo

Flash forward to 1976: An Die Musik, a show that is as difficult to watch as it is to do.

We are lucky to have the unending hospitality from people who understand and sympathise with the play. During the big freeze of 1976, we are invited to go ice skating by the Mickery Administrator, Otto. We have ice skating boots, are fed and warm and then off we go skating on the Prinsengacht Canal. 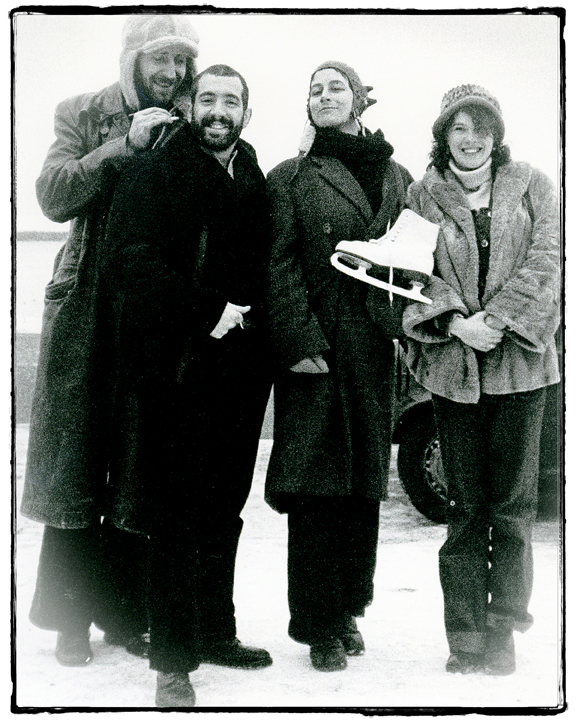 “I remember this very well. Tim was just two years old, having spent his birthday travelling from Paris, past Brussels and on to A’dam. Catherine and Tim had been with us for about five weeks. One memory from this time was that the group – despite our public persona were so kind and indulgent. Not everyone’s idea of fun to have a toddler along on tour, I’m sure. Tim really enjoyed their company at the breakfast table and we got the occasional offer from group members to take him out in his sturdy Silver Cross pushchair. On this day I think you and Rod and Dick had agreed to take Tim out on a little jaunt to give Catherine and me a bit of a break. Looking at the picture reminds me too of how cold it was. It seemed everyone had some skates somewhere…” Ben, Rod, Cathy, Richard and Tim in the pram outside the Museum Hotel

Rudi Engelander, theatre critic, dramaturg & friend of the Mickery, born in the Netherlands, who had the idea for An Die Musik which Pip based the show on.

An extract from an interview:

“The Nature of collaboration within the Pip Simmons Theatre Group. Pip – he never directed in the sense of do this or that – he gave great responsibility to the actors to fill in in whatever they were doing… and he would look at the total picture and the pacing.  But actors have always had a great independence in this work. Scripts emerged – I mean both production and script emerged, [it] was developed, while going along really. He was the final arbiter of everything there of course – the theatre group was called Pip Simmons Theatre Group, as simple as that …. And everybody enjoyed it because they knew that working with him they would have a great time and would probably make some work that’s worthwhile performing.” 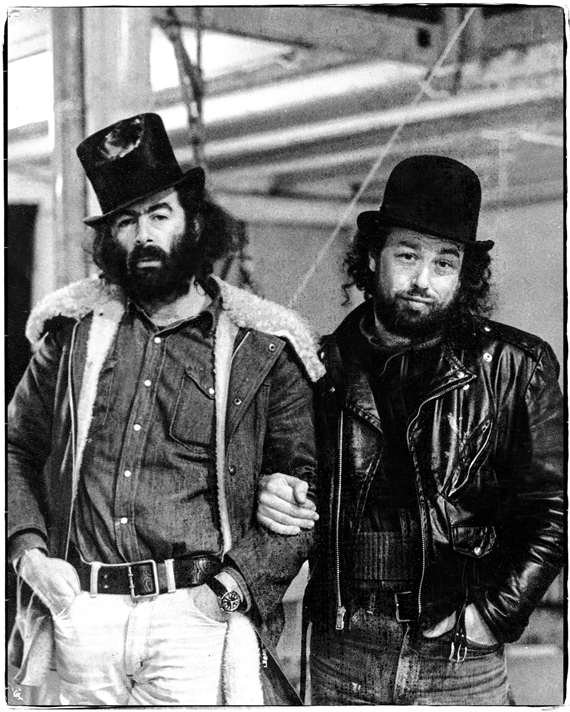 Sunday Times Review 1975 “….a show within a show, ostensibly a musical entertainment taking place in a concentration camp. The concert party consisting of prisoners performing under the threatening baton of a Nazi guard begins with a short ‘operetta’ entitled ‘The Dream of Anne Frank’. The final image imprints itself indelibly, the doomed musicians seem to sit on the clouds like The Heavenly host in a Giotto painting. Hatred has been purged. Simmons here surpasses Grotowski.”

We do 159 performances of An Die Musik, the last being May 1976 somewhere in Denmark.