The days and dates begin to merge. I carry a diary with me; I look at it frequently. I buy a road atlas of Europe so I know where we are going, what border we are crossing, what country we are in. It’s getting colder, we are on the way to Oslo. This is a long journey driving from Denmark. Many ferries; a cold, cold, long, dark journey. It begins to snow, we are now off the autobahn, we are on a mountain road. How does Rod know the way? No Satnav … he just hunkers down and drives and drives.

It’s very quiet in the cabin, unusual! Someone is usually larking about. Vision is nil, the windscreen wipers thunk, thunk, thunk the snow away as it piles up on the windscreen. Rod’s knuckles are white clutching the steering wheel. I’m sitting next to him, concentration is visceral.

I hear a tiny mumbling coming from someone, it’s Chris. Is he praying? It’s the only sound in the cab apart from the windscreen wipers. Chris is very quietly saying some verse. I think we are all going to die, and can feel my heart almost stop. Is that a deer ? No it’s an elk. Rod swerves and navigates the entire crew, the entire sets of 2 shows, a cockerel and 3 doves. Nobody dies. We get there, we arrive in Oslo. It’s late, it’s dark, it’s cold. We need a drink, the hotel is closed for drink. Not a sip.. No food, nothing till breakfast. We go to our rooms. I hug the radiator and wait until breakfast. The Dream of the Ridiculous Man opens with Chris Jordan’s music – ‘Among the audience, English tramps wander around silently, they have a shifty look about them, a menacing smile on the lips suggesting they are about to ask for charity, on a screen, we see the face of a terrified young man, gentle music is playing, a girl in an old raincoat too big, waits at the front’  (an extract from unknown review)  and we, the company, do our Tai Chi movements in our tatty raincoats, singing ‘its hard to be the only one who knows the truth …….’

Oh the joy of doing this show. Meanwhile our sister show, An die Musik, is forever there as we alternate both shows on the 1975-76 tour. Pip drives separately with Dick Johnson our lighting man and one other. These are our venues, we manage to get home for Christmas 1975 and then continue the tour till May 1976. The travel arrangements worked okay most of the time, except Ben remembers this.

It’s breakfast time on the day of departure from Munich. We have two vehicles, it is my turn to ride with Pip! At the end of breks I go upstairs to my room to get my stuff and when I come down the bus is gone – no probs, so I sit and wait for Pip to appear. It is about fifteen minutes before I realise that Pip has left too! So, here I am in Munich, some decades before the advent of mobile phones, with no way of letting anyone know where I am and no way of knowing where everyone else is headed. All I know is that they’re going to Paris, but I have no idea which theatre or which hotel. I have enough money (just) to get to Paris, but what to do then?

I look at a map and see that they must cross into France just outside Strasbourg. I grab my bag and hotfoot to the Hauptbahnof. Single to Strasbourg please! I’ve already lost a bit of time by the time the train leaves, but reckon I should just be able to head them off at the pass! On arrival at Strasbourg, I jump into a cab ‘a la frontiere – vite, s’il vous plait’. The cabbie obliges – just as well. As we pull up at the crossing, the tour van miraculously appears. Grab bag, run towards van and get on. ‘Oh hi Ben, where’s Pip’ is the underwhelming reaction. Where indeed? Turns out that both parties thought I was with the other one. Later, I mentioned to Pip that he’d left me in Munich – I think he replied with a grunt. The unending hospitality continues. An Die Musik, this show never fails to make generous folk want to look after us. The entire group is invited to the mountain house of a Belgium Millionaire, a friend of the theatre. I have goat cheese for the first time. Goat cheese wrapped in vine leaves. The wine runs freely only I have a boil on my bum and cystitis. I am on antibiotics and firmly told no alcohol … a bummer, but Pete found something nice in the van for me. Whilst everyone else drinks the drink, I smoke the smoke. You may be thinking it is the life of Riley, dining al fresco, but touring is physically demanding, and these diversions are welcome. At home the company played to 100-200 seat venues and here in Europe to 500-1000 seat venues. Europe appear to appreciate this hybrid experimental/political theatre and the company was embraced. 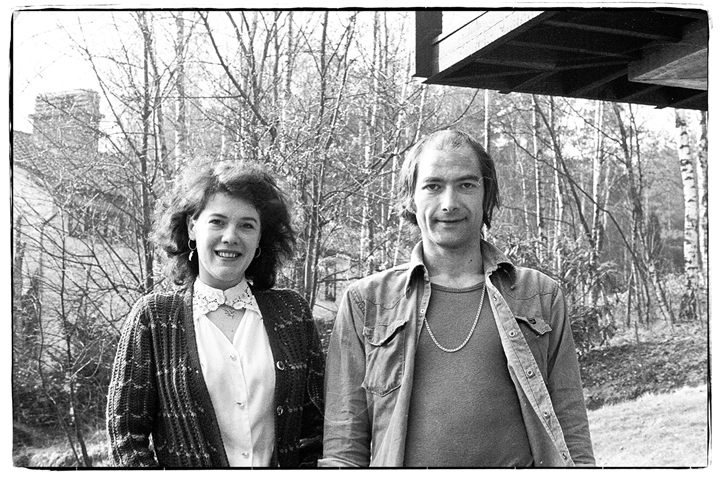 Rowan remembers touring as a juxtaposition of squalor and luxury.

We passed by stunning places in our claustrophobic customised Mercedes van filled with smoke and hangovers (only the alpha males allowed to drive). We ate in the greasiest of cafes, huddled into an infinity of hostelries, slunk into the darkest of dives after hours and stayed in some quite nice hotels. When Ben Bazell was there with his guide book he ensured our journeys were broken with enlightenment and culture – Is that how we ended up on Lake Como? I’d forgotten I’d ever been there. I remember though staying in an unusually comfortable hotel in Switzerland where we were brought breakfast in bed – maybe they didn’t want a scruffy crew like us in the dining room. I had a room to myself overlooking a lake and the coffee was the best ever. Even though we have many venues, we sometimes have a week to travel. So Roderic who speaks fluent French is in charge of Les Routiers the lunchtime stop to refresh when in France. Chris speaks a bit of German although no goat cheese wrapped in vine leaves in Germany. A takometer is fitted in to the cabin so driving is limited to the hours takometer allows. The van finds plenty to occupy en route the occasional zoo, cave, seaside or lake. Rod and Rod look after the touring machine.

I, being wardrobe mistress, have to find a launderette. We have loads of those in the UK and can usually find one somewhere in Europe; and joy of joys, the occasional theatre offers this service, only I don’t usually find out till too late.

In Oslo, not only is a bottle of whisky £100 but no laundrettes, none. The hotel says we have a laundering service, I reluctantly hand over a rancid bag of An die Musik costumes. Can’t even call them costumes, they are rags. The rags are returned beautifully laundered, each bandage (yes bandage in plural, many bandages) all lovingly pressed with a little tag with the name of the establishment. My Anne Frank dress has never looked lovelier, the little white collar starched and pressed and as for the boys grubby long johns full of holes, all carefully pressed and folded. What must have they thought of this strange tribe of English people who wear such rags. The bill was phenomenal, the price of a washing machine. I can say please and thank you in most languages. I speak French. I can say, hello, goodbye, good morning good night, another wine please, another beer please, another Croque Monsieur please and how much is that please, which I think is pretty good. Sheila dressed to the nines for a visit to La Scala Milan.

And so 1975 melts in to 1976. The tour continues, we drive, unload, do show, load van, hotel, sleep, have days off, sometimes weeks when a show falls through, have some great food and some awful food, get bored, read books, explore cities, towns and whatever comes our way. We get used to the border crossings as Chris, affectionately called the carnet führer, collects our passports and then spends ages in customs explaining why we have a cockerel dove and a gun (prop) in the back of the van. Sometimes we are waved through, sometimes we are suspiciously inspected and patrolled and searched. We do our last An Die Musik. We have performed this extraordinary show 159 times, and now we say goodbye to it in an old converted cinema housed in a shopping centre somewhere in the Danish suburbs.