Two young women walk slowly through thick swirling smoke in time to music, hypnotic music. They stroll past a demented young man hanging high on a cross made of scaffolding and light bulbs. The two young women pass either side without a backward glance but they know that he is wearing a crown of torn flowers, and that his arms are outstretched a  dove perched on each hand, he looks stricken as he watches the two women because he knows that they are temptation. They crouch down and start dressing very slowly, shabby laddered stockings, leather brassieres, down-at-heel shoes. The drone of the music continues as they finish dressing.

Doc Suicide, on studded six foot stilts and in a black cloak, makes an entrance while firing a gun. His strides towering over everyone and  is tall enough to be face-to-face with the Ridiculous Man strung up high, suffering on his cross. The gun is offered to him, this man is determined to seek the truth, but can end it all now with one bullet. The smoke chugs out, the band plays and one of the young women sings ‘He was Despised’ while the other struts with maracas. The doves fly away as Meirave is singing. I have the maracas, Emil has the gun, Roderic is on the cross. Pete sings lead, Rod backing singer and guitar, John drums. Lighting by Dick Johnson, the vision is all Pip Simmons and it is arguably one of the best songs Chris Jordan ever wrote — CORRUPTION. The vision is dark and we love it. 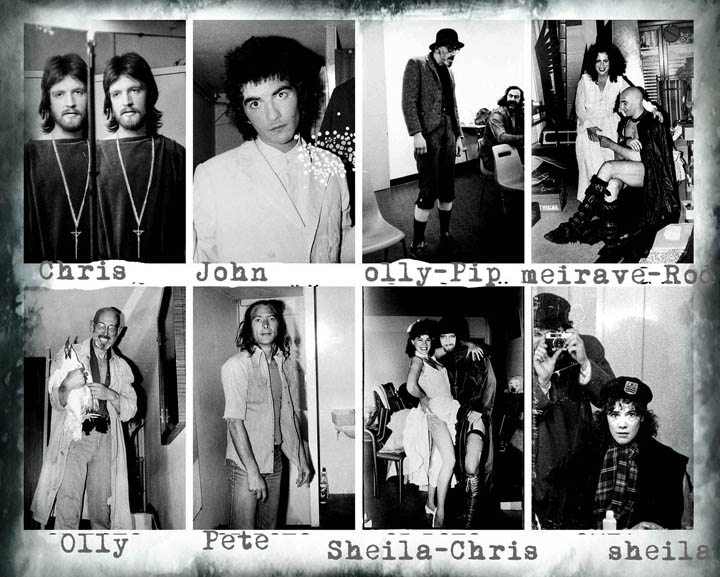 Backstage photo of Dracula and The Dream of a Ridiculous Man. They could easily be mistaken for the same show. Perfect travelling companion:, crucifixes and doves in both. Dracula — blasphemous, frenzied and provocative; The Dream — joyous, subtle and tender. We embrace both shows equally.

Pip Simmons is in Lyon and has just performed at the Ateliers its latest creation ‘The Dream of a Ridiculous Man’. After the expressionistic beauty of An Die Musik’s scenes of torture and humiliation, here is a, joyous play, both poetic and burlesque. An ordinary man, awkward and self-conscious in his everyday life, frees himself from his frustrations in a transcendent dream. In a bizarre & exciting way the actor-musicians and singers lead us on an eighty minute journey, always mid-way between sensuality and gentleness, starting with salvation army sermons and ending with astoundingly provocative mystic visions to the sound of rock music. The moral of this subtle, absurd show is that the dreams of our society only result in chaos and confusion.
– Le Figaro 27/4/77

This production has a simplicity which is as fascinating as the invention that animates the evening and only the English could have created it. The French would have politicised the argument, intellectualised the parable, bowdlerised with logic the savage eruption of real life where nothing is ever defined or definitive.
– Libre Belgique, Brussels 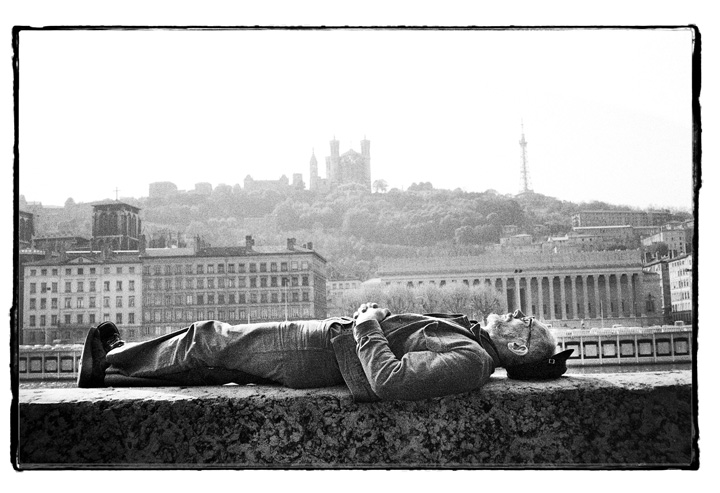 Olly waits patiently for the theatre to open.

The French and Belgians shower us with hospitality. After every first night, we are greeted with warmth and wine and nibbles and bonheur. One fine evening we had consumed so much of this lovely wine backstage, someone had the bright idea to do the show again, inebriated techies let us back in the theatre and did the show again in the dark, how we got away with that isn’t on record. It was a blinder that took days to recover from ………….

I have everyone I care for along with me. Not so easy for those who have loved ones back at home, you can spot the signs: ‘I’ve got no time for you right now, don’t bother me’ .. moody blues settle, touring is still a novelty, we are a young group, silly pranks keep us going when boredom sets in. John and I swap clothes for a day, he looks nice in my dress, Dick writes a message to his girl back home on an entire pack of Rizzla papers. A huge argument then erupts in the van when someone doesn’t want to hear the same music again, sulks all round, Roderic goes straight to his room rather than eat and drink with us, that doesn’t last long, sulks come and go, full blown bad feelings are rare. 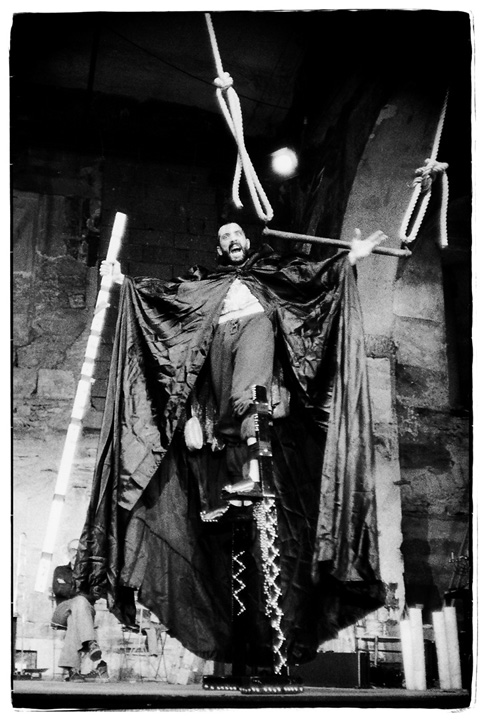 Emil during get in, Doc Suicide checks the stage for holes dents or nails 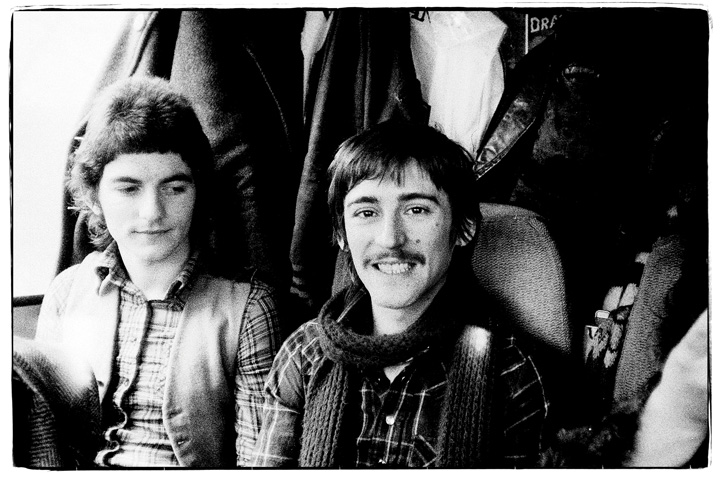 John and Dick back of van

The best time is doing the show but shows get cancelled, we make the best of it. French food and wine are too good to ignore. Breakfasts are croissants and homemade apricot jam with hot milky coffee while sitting under the apricot trees that provide the jam.

If it’s a travel day, a stop at a ‘routière’ and usually wine and dine in the evening unless its show night. Mobile phones not invented, email not invented, text messages not invented, Insta-Twitter-Facebook not invented. We have letters, postcards and the occasional expensive phone call home. A tour can be 6 months. We have stops along the way. We go home for Christmas. We visit zoos caves and churches, I look forward to buying postcards to send back home. Lucky to travel with a bunch of show off’s who like to be in front of a camera, I have to wait till we get home to see if the photos turn out okay. I have an Olympus trip 35 mm point and shoot, and later Nikon L35 compact. On a long tour, I can take up to 10 rolls of films and once lost 5  spools. I was sick with grief, still am. 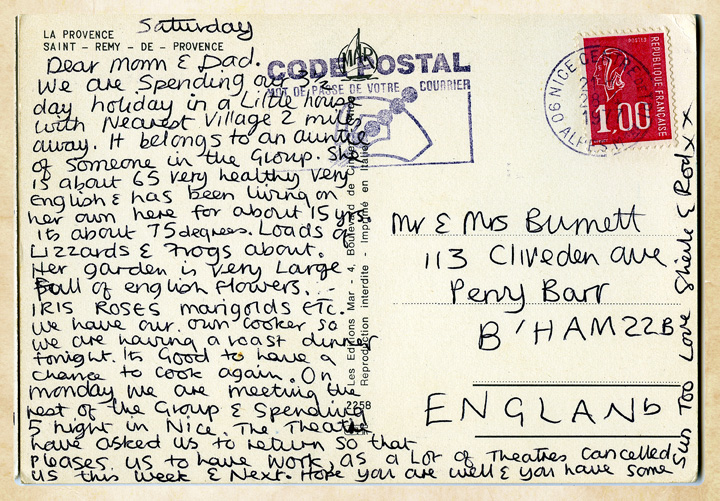 Drac 3 and Dream are a wonderful combo to tour side by side. We inhabit these shows and between us inhabit whores, vampires, doctors, bats, professors, lunatics, strippers, little girls, old men, priests, Tahitians, trapezists, shifty tramps and more. Rod has the big black cape in Dracula, Emil has the big black cape in Dream. The band play, the little girl cries, the vampires scream and during the day we load the van drive to the next venue ready to do it again.

The secret of these young Britishers lies in their honesty, their directness and the intensity of their realisations – Telegraf