March 1977 Harwich to Esjbierg on the over night ferry. How do we entertain ourselves on this long journey? First stop the bar, its going to be a long crossing so John and I decide to join in that evenings dance competition, can we dance ? of course not and when we see the ladies and gents in their finest outfits elegantly showing up and then showing their skills, we get nervous. John is up for Tango and me up for Rock n Roll… Several 3 fingers of whisky later we disgrace ourselves by dragging the poor dance entertainers around the floor, take a bow and then run for cover. Long ferry journeys often end up like this and we have many long ferry journeys.

This is the  beginning of the long 3 month tour Drac/Dream, starting in Scandinavia snaking our way through Switzerland, Norway, Denmark, France ending in Nice. We will inhabit both shows for 3 months and then bid them farewell, they are our reason for being here, we unpack whichever show we do that night, do the show, pack it up and off we go to the next venue, sometimes one night sometimes one week, sometimes just driving. 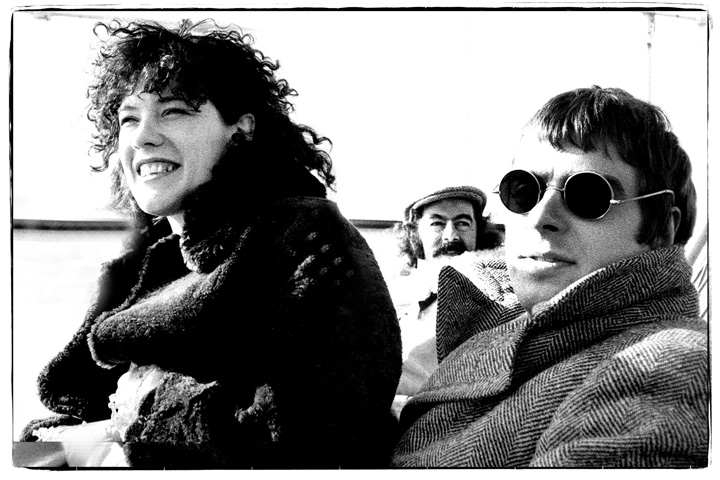 Sheila, Pip, Roderic heading north on the seas to Scandinavia 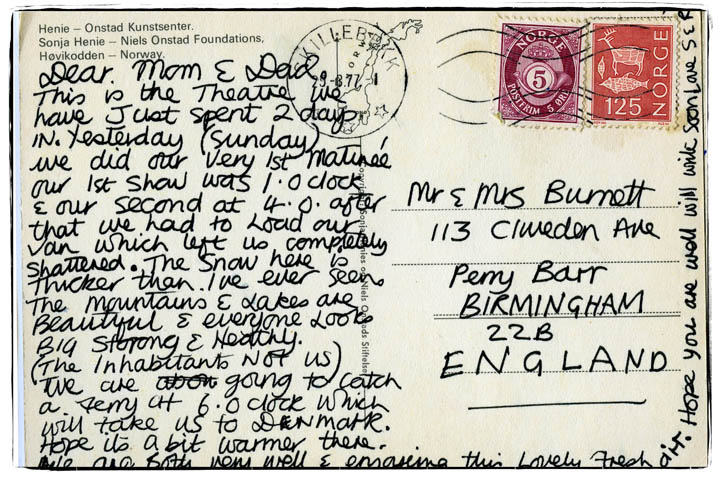 This tour lasted 3 months zig zagging through Europe one time driving from Stockholm to Nice for one show and then touring north again through France and Germany, sometimes doing Dracula, Sometimes Dream, sometimes alternating both. 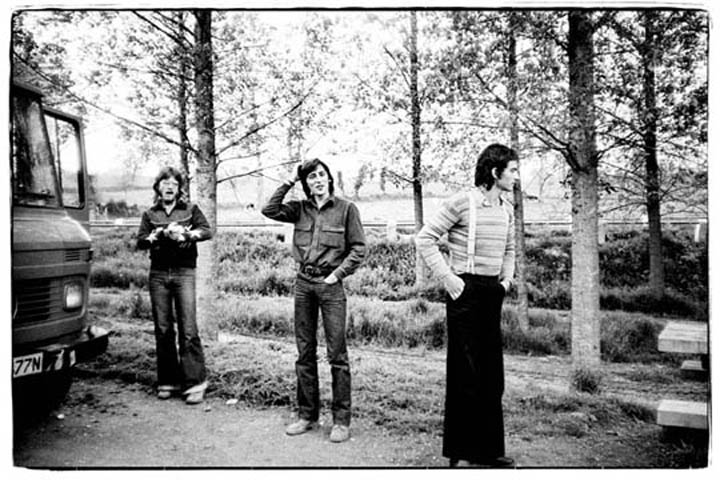 I (Lucy Vampire) have a cold, a bad one and have been taking cough mixture with stuff in it (probably morphine) it make me high and dopey. Its first night in Hamburgh, all goes well untill I get out of my coffin to attack Emil (Dr Seward) who  has to catch me and hurl me away after a well rehearsed somersault, and then grab me by the hair, a well rehearsed stage trick. I don’t hit my mark and fall on my knees, Emil doesn’t wait for me to grab his wrist (stage trick) so drags me along the stage by my hair, I am furious. Meanwhile Olly (Jonathan Harker) throws a well rehearsed crucifix at Rod (Dracula) who whilst tearing around the stage in flapping bat cape gets kicked in the balls. Rod throws a well rehearsed top hat at Olly which skims his left eye. Emil by now has thrown me over his shoulder and carries me through the audience to a balcony where the band are and I howl with pain and fury. Do the audience think we do this every night ? it goes down well, we never do curtain calls, we leave the stage injured and upset. The upshot of this is Rod has a damaged testicle, Olly has scratched his left cornea and me and Emil are not talking. Rod on doctors orders is told to rest for 2 nights else he won’t be able to have babies. This is the only time in over 10 years we cancelled a show.

This is the one and only time we cancelled! 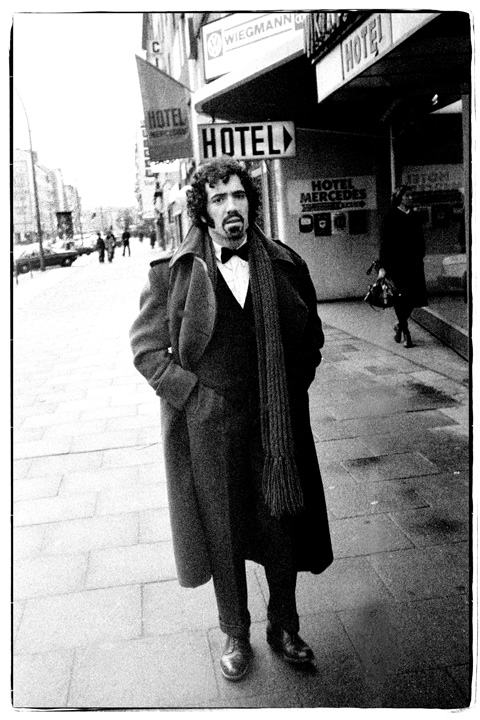 Dear Sis, I am sitting in the same cafe ordering the same dinner and writing the same postcard as 1 year and 3 months ago, its a time warp, its like we never did the I.C.A. The audience is so different here in Denmark. We are in this strange High School miles from anywhere doing Dream. The audience are all the kids from this school, they wonder in and out all through the show, giggle at you and offer you sweeties and tobacco, they clap soon as you suggest it and join in and then piss off in the middle of the show if they feel like it. Someone jumped on stage and tried to join in …….totally harmless but unnerving. When we arrived here yesterday they were cat calling Rod Kojac .. hey you Kojak!!  we should have known …. 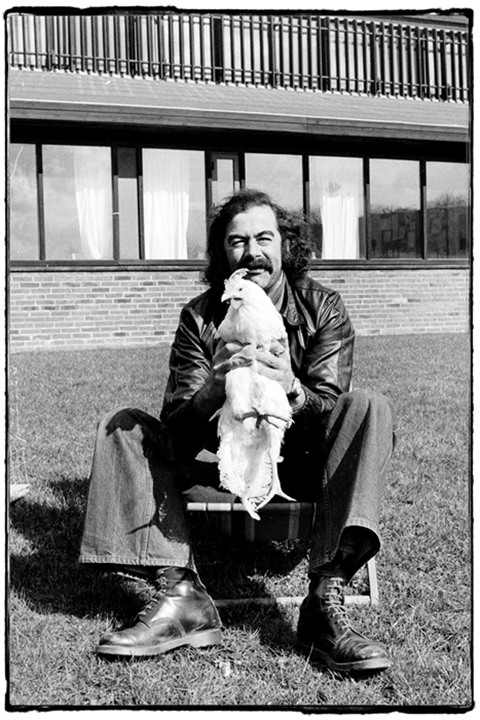 Dave is looked after by Olly who also looks after the Doves. Dave only gets to perform in the Dream whereas the doves perform in both shows. We take it in turns to have the doves in our hotel room and Dave stays with Olly. No animals are harmed in these shows, the are fed an watered and we love them. 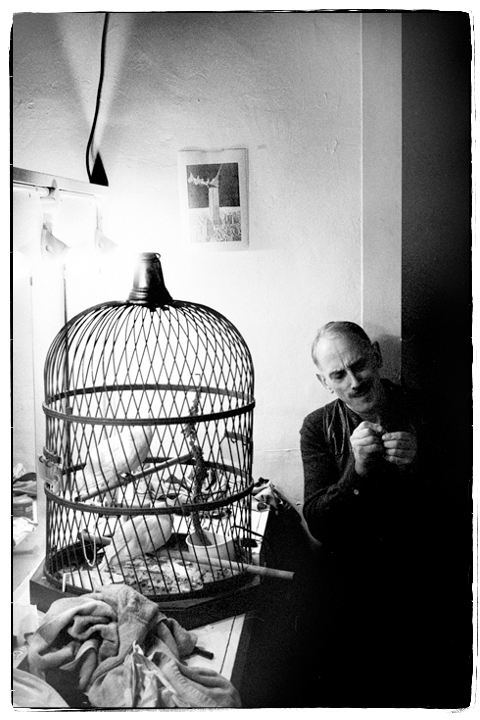 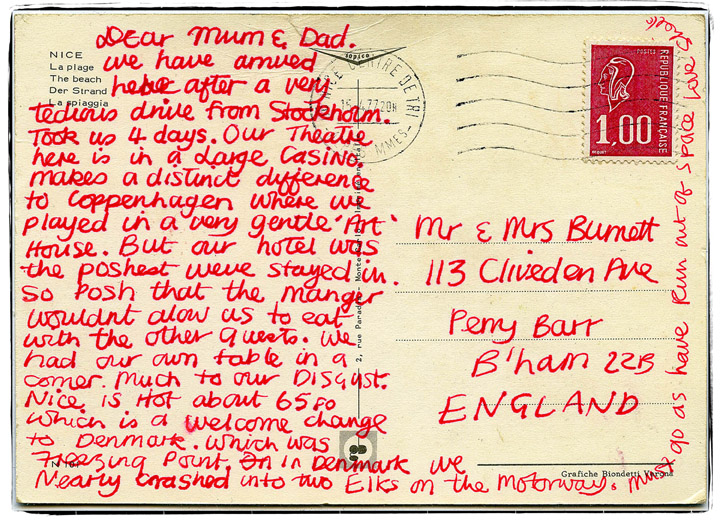