It’s Paris. It’s January 1977. It’s my birthday. I’m not yet 30. I’m in this show called the Dream of a Ridiculous Man. Before the show starts I need food so run across the road in costume to the brasserie.

I can ask for a ham sandwich in French and the Folies Bergère are just down the road! Very exciting and I’m not yet 30. This photo was taken after the show at the bar across from Théâtre Le Palace, in the Rue du Faubourg Montmartre. This splendid bar full of mirrors and brass décor is called Le Grand Zinc. I have Chanel No 5 for my birthday and our new boy John is with us to celebrate. Pip announces that he was married last week to his beautiful Swedish love Helena, so double celebrations. The waiter takes the photo. 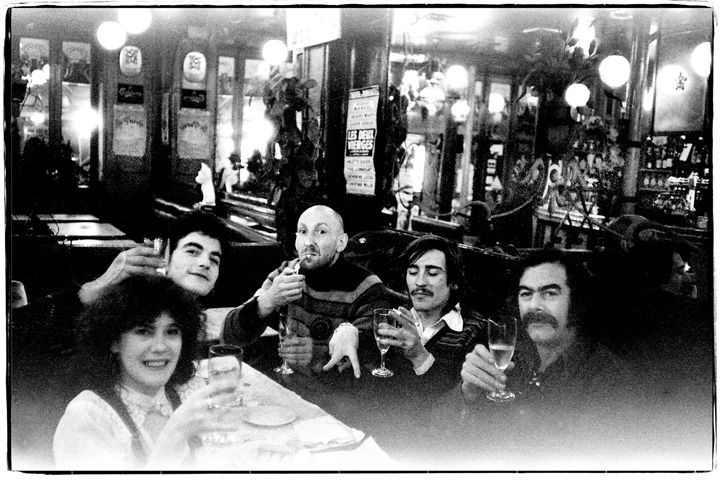 Sheila, John, Rod, Dick and Pip in the Grand Zinc.

Paris, yes Paris! We return with The Dream which we perform each evening. Sad to say goodbye to Ben Bazell, big hello to John Altman who we met on tour last year at Leicester Haymarket. John had spent his Christmas learning the songs and the script and is raring to go. We need to build an audience. An Die Musik is history for us, but not the Parisian audience who aren’t particularly interested in our new show at first. We manage to get full houses by the end of our 3 week run and The Dream becomes our new super star show, happily knocking An Die Musik from its pedestal.

We rehearse a new Dracula by day and perform The Dream by night. Tempers fray, its hard work, we are looking for new Drac characters. I go to the Paris flea market to find a new costume; a naughty white bodice and pearl choker with a flouncy skirt and tight belt. Meirave does similar. Roderick as Van Helsing has decided to be crippled with a club foot. Joan Oliver, wife of Peter Oliver, and our administrator has to carry a heavy built-up false boot from London. The usual fights erupt from Dr Seward – Emil and his fly-eating Maniac – Pete. But… there are new songs, new words, new attitude: the re-birth of Dracula. 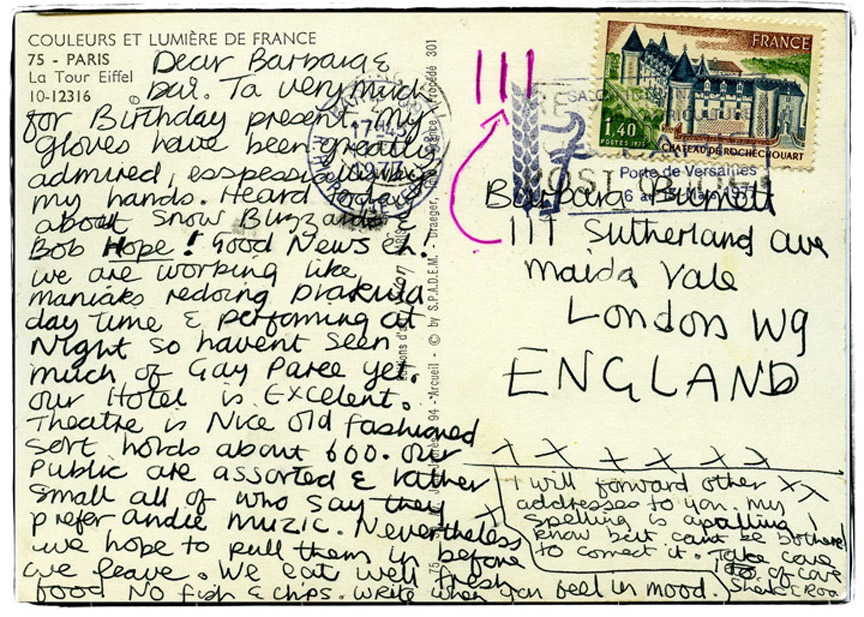 “Like boxers at the height of their form, the Pip Simmons Group have acquired a strength and extraordinary command that explode in The Dream of a Ridiculous Man.”
– Le Monde 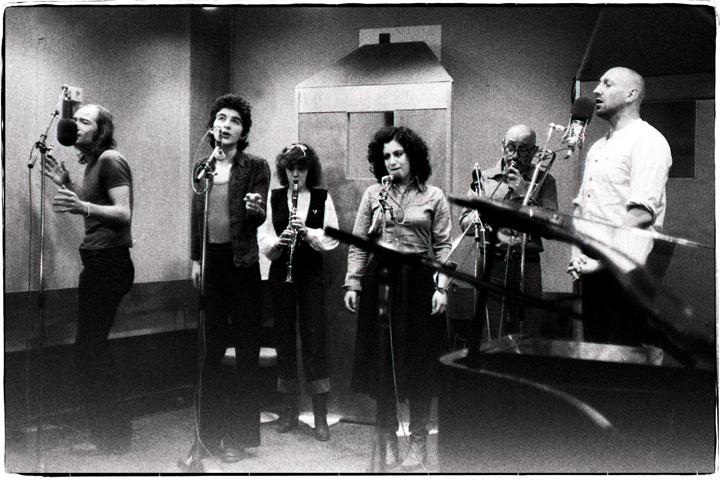 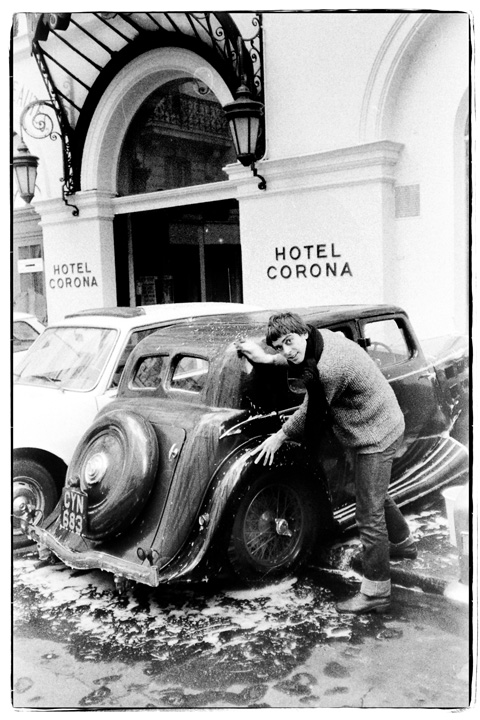 Roderic with his new love.

How Roderic finds the time to buy a lovely old French car is a miracle. Here he washes his new love in front of our digs, Hotel Corona. Paris is close enough for him to be able to drive it home to London before we start our Drac/Dream 77 tour of the UK and Europe as more rehearsals are needed in London to polish and hone Drac 3.

Ben has given us all a leaving present, he made us individual cassette tapes to help us on our future touring. This is hours of listening time, and will save squabbles about what to play in the van; for instance, we don’t all like Jackson Brown. My tape has YES on one side and the theme from the Railway Children on the other. These tapes will be kept in the van with newspapers, books, maps, sweets, Rizla papers, cigarettes and a well-thumbed Routiers, the truckers guide book for eating in France. 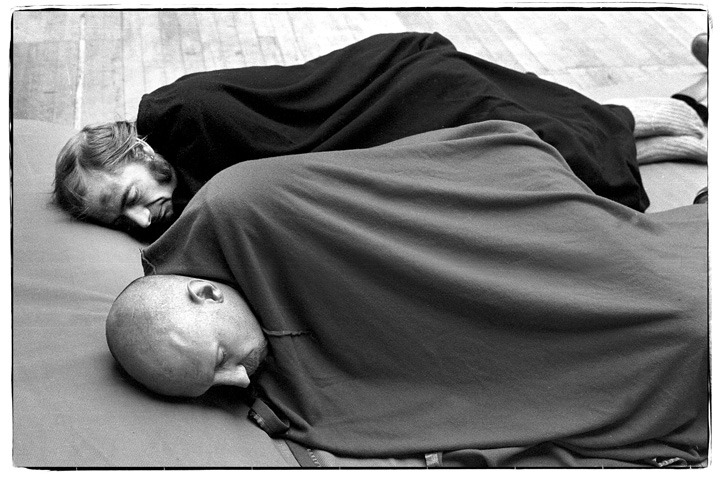 Roll up! Roll up ladies and Gentlemen! All seats 50p at the Glasgow Citizens Theatre. We are happy to present an all singing, all screaming Dracula by the one and only Pip Simmons Theatre Group! Put your hands together for Dracula 3!

This is the first night, our premier with our first audience. We are in a tableau behind an iron safety curtain on the stage of the infamous Citizens Theatre. John our new drummer boy whispers I’m f****** nervous as the iron curtain slowly grinds it’s way up. Miraeve and I, the show girls, prance into position and present our superhero, Dracula, who, like a bat out of hell, hurls his way from the back of the auditorium – bald head, fishnets, bat cape – on to the stage. Off we go with our Drac 3 cabaret.

Our Glasgow audience are fantastic and as noisy as us. Much fake blood was spat, much screaming and snarling as we romped home, cheered on by this fantastic crowd. Drac 3 in its 3rd incarnation is the best and is exactly 90 minutes long with no interval. John! John! John! The girls called at the stage door. They begged me to get some drum sticks from John. This is a first!! Never had groupies before. John broke a few spare sticks over his knee and I handed them out to the girls… Then we found out the van had been broken into and all of our travelling tapes had been nicked… This is the beginning of our Drac/Dream 5 month tour – March 1977. 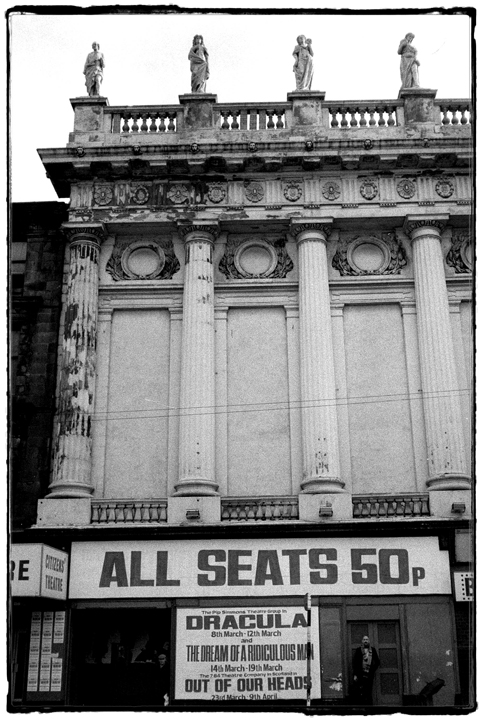 “Lord Provost Peter McCann seems to think that only “sick minded weirdos” will go to see the group – an uncharitable view of the good people of Glasgow who turned up last night, and wait a minute, the audience didn’t stab or mug anyone at all. It might be of interest to our would be censors to hear that no one walked out and the company were warmly applauded. My advice to Mr McGann and his fellow protestors is to relax. The Pip Simmons Theatre Group will go away soon. Will the violence and social deprivation in Glasgow do the same?”
– Robert Jeffrey – Evening Times 15.5.77

All photos and blog ©Sheila Burnett.