The show is sold out for a week, every seat is taken. The play starts as the audience arrive, Rod in his stripes plays the accordion whilst our audience take to their seats. We start the first act of An Die Musik, a dumb show melodrama, a caricature of Jewish life around the family table. I represent Anne Frank and Emil is my Dad, Roderic is Mum and Pete is the brother. Olly in Nazi uniform serves us doves to eat whilst doing wicked things to me. This all takes place whilst the concentration camp orchestra, Chris, Rod, Rowan & Ben play a haunting operetta: No More! No More! No More! The sound of an air raid siren marks the end of Part 1 and as the siren screams we leave the stage and return for Part 2. Pete is now the Nazi guard and all of us are in our raggedy uniforms with the yellow star.

The lights come on, shocking and bright after the darkness of Part 1 and this is when the stage is stormed. A strategy had been talked about in case this should ever happen, we only had to do it this once. Pete ordered us all to stand in a line, and then ordered us off the stage which we did in complete silence. Emil and I dashed up to the rafters looking down on the stage to see what was going on. We watched as about 20 angry students rant and rave in French on the stage below us, we found out what it was all about later.

Ian Brown, artistic Director-West Yorkshire Playhouse was in the audience that night & he wrote ………

During this performance, the stage was stormed by what I presume was a radical anti-fascist group who thought the play was about glorified fascism. There were about 15 of them and had some violent arguments onstage with the management before the audience was ushered out.Sometimes when you see radical things onstage, you do wonder whether anyone will stand up and say, “ actually, I’ve had enough of this, you should be ashamed of yourselves” Odd thing about this protest, It actually felt quite fascist! Its a very strange sensation when real life meets theatre. I was very mindful of the actors who were milling in the foyer with us.

Anna Furse-Professor of Theatre also in the audience remembers …..

The show left an indelible mark on me. It continues to make me reflect on the ethics of representation, what we ask people to look at and why – the basis of the whole protest in Paris in fact. I go to the Recamier to see Pip Simmons Theatre Group,  minutes in protestors throw paper on stage and rush it, shouting to the audience to stop the performance. People start fighting. Three rows ahead an elderly man is hit and I hear him call out: but I’m Jewish. I was there!” The safety curtain comes down. Show cancelled. We are reimbursed & invited back a few days later where I join the post show gathering, down in some dark place. (This is the theatre bar which is in the basement ) 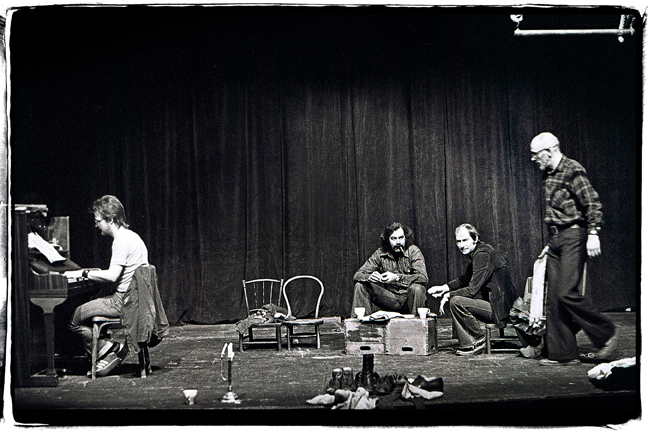 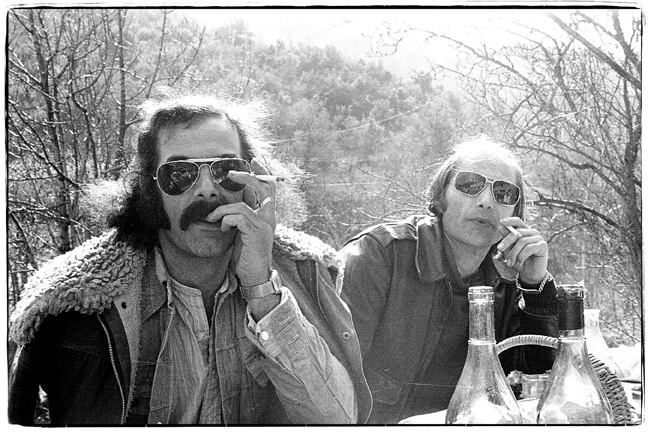 Jenny Topper at that time the artistic Director of Hampstead Theatre chose An Die Music for Dramatic Moments: 26 for the Art/theatre Guardian 1996:

With a devastating lack of sentimentality, the company explored the fate of those inmates of a nameless concentration camp who, having been made the fools and play-things of the SS, were finally forced to play themselves to their deaths. I remember the rigorous selflessness of the actors (as near to self abasement as you would dare to go) and their austere dignity as naked and playing their instruments, they entered the gas chamber.I remember the hopeless beauty of the music-Schubert & Beethoven & the emotional and ethical challenges the piece presented to its audience. 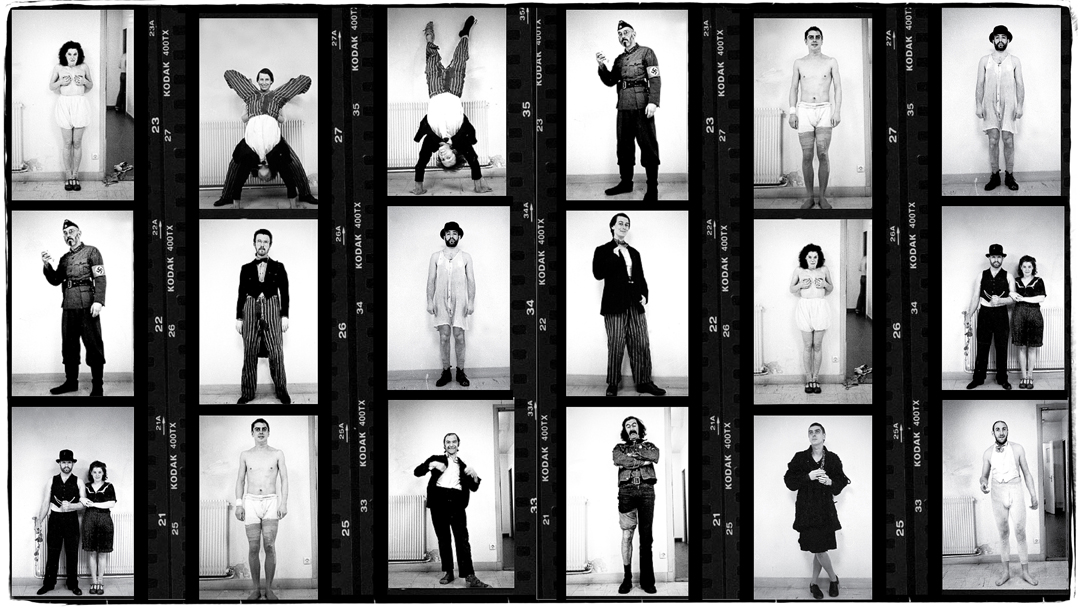 Photos taken backstage of our slowly disintegrating outfits. I had 2 dresses and alternated them, the stripes were interchangeable.

Another night in Paris, Emil is ill, he can’t do the show and has to stay in bed, doctors orders. Me panic, what can I do without Emil, he is my Dad, he leads I follow, my world is with my Dad and I will be on my own. We all have our little chairs with sawn off legs for the first half, the dumb show. Pip puts a photo of Emil on the table where Dad is supposed to sit and talks me through it. This is the night it happens, I suddenly get it. I am on my own, no one to rely on, I am am free to roam the stage like an eerie dark forest. Roderic (Mum) reaches out to bring me back to my little chair and I stay in this magic place for 90 minutes. Pip pinches my cheek after the show and says Muzzeltoff and Emil is really pissed off that we have done one of our best without him.

Occasionally this show takes its toll on us, thankfully never all at the same time, I had people come up to me after the show when it had been my turn to hang naked from the trapeze only to say ‘I hate you for doing that’ you shrug it off because I didn’t hate me for doing it, the trapeze exercise was random, someone different each night, it looked worst than it was, a dramatic devise that never fails to shock, not uncommon in the 70’s. We do this show 159 times, sometimes it is so brilliant but sometimes in a matinée and a small audience, the exposure is cruel, you never know which way it’s going to go, sometimes we do a routine performance just to get through it, we all know how to do this. 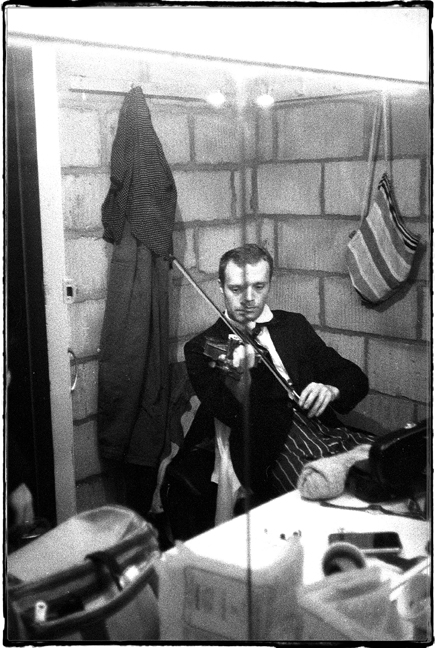 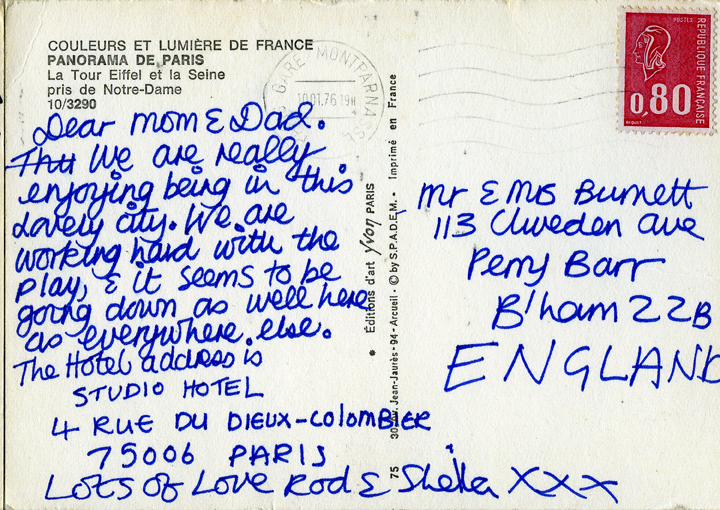